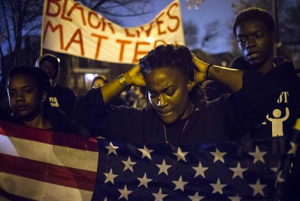 Last night, nine Black people were murdered, including state senator Clementa Pinckney, were killed in an act of domestic terrorism while attending Wednesday night prayer services at their church in Charleston, South Carolina. State senator Pinckney was the senior pastor at the Emanuel African Methodist Episcopal Church, the oldest church in the South and it was established in 1816 by Denmark Vesey, who was later implicated in a slave revolt and was subsequently hanged. These murders also took place on the anniversary of this same slave revolt dated June 17, 1822.

If I closed my eyes, I would swear I was in some kind of twisted time warp. It is 2015 and black children are being beaten and arrested for swimming in pools designated allegedly for white people, black churches are being targeted by racist psychotics and black people are being hunted down like prey by the police. The more things change, the more they stay the same.

Although American society would like to pretend that racism is an antique of the past and that black people just need to get over it, we cannot. The reality is that a black life don’t mean shit. As long as black lives are not valued and a 12-year-old girl’s jaw is fractured and her ribs are broken by a white male police officer, we will not get over it. Until there is justice for Tamir, Rekia, Trayvon, Tanisha, and the thousands of other black people who were murdered for the sin of blackness, we will never get over institutionalized racism. This country was built on the blood, sweat, tears, and grit of Black slaves who were brought here against their will, never received any type of compensation after they were freed and whose descendants are still getting treated like shit because they are black. We will never forget so just get used to it.